Given the gritty truths and intense melodramas that have been such a huge part of hip-hop – especially its 1990s golden age – it’s surprising that the genre has given us no stone-cold brilliant concept albums. Is what you’d say if Prince Paul had never made this, easily the greatest hip-hop concept album of all time, and one that I’d take over Tommy any day of the week. A Prince Among Thieves is the story of Tariq, an aspiring rapper and fast food worker who dreams of using his art to get rich and provide for his mother. When he lands a cherry meeting with Wu-Tang Clan, Tariq needs to raise some money to pay for studio time – his demo is a little rough – so he dips his toes into the drug game to make ends meet. While it’s predictable that this story would end tragically, Prince Paul infuses it with flash-forwards, Shakespearean betrayals and bursts of dark comedy, telling a tale that never gets confusing, and always keeps you on your toes. Paul’s production work is on the level with his classic De La Soul material – “Steady Slobbin'” and “What You Got” feature some of the most irresistible soul loops he’s ever dug up. The actors are totally convincing, and guest stars like Kool Keith, Chris Rock, Everlast and Big Daddy Kane make for a hell of a cast. Nobody shines brighter than the star though – Breeze Brewin’ is the main reason we sympathize so much with Tariq; he’s the perfect, unassuming hero in the skits, and his steady, tight flow is the backbone of the majority of the songs.

Take a listen to “What You Got,” whose funky sax loop and playful interactions between Tariq and his pal True are a sign that it comes early on in the story. 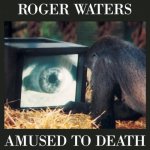 After releasing the final Pink Floyd album in 1983 – the underrated anti-war elegy The Final Cut – Roger Waters got into a weirdly allegorical groove, from his pervy-road-trip-as-metaphor-for-something-I-don’t-really-understand solo debut The Pros And Cons Of Hitchhiking to the guy-in-a-wheelchair-ends-capitalism follow-up, Radio K.A.O.S. Not to disparage those albums, both of which have aged far better than anything the David Gilmour-led edition of Floyd ever recorded, but everything about Amused To Death feels like Waters getting back to business, saying to hell with prog-rock librettos and writing the kind of acidic sociopolitical material that made The Wall and The Final Cut so unforgettable. “And the Germans killed Jews and the Jews killed the Arabs and the Arabs killed the hostages and that is the news,” his wonderful backup singer P.P. Arnold belts on “Perfect Sense, Part I,” and that’s the basic theme of the record – organized religion, governments and the media colluding to support humanity’s vilest sins. Because this is a solo Waters album, things do get too preachy for comfort from time to time (especially an uber-cheesy battleground play-by-play from Marv Albert). But you’ve gotta forgive him for these moments, because his rage is so pure, his hook-free arrangements so beautifully meditative, his vision so artful. He spends much of Amused to Death musing about what God wants (spoiler alert: it’s all bad stuff). Say what you want about the man upstairs, but he gave us Roger Waters, and that’s a check in the “pros” column for sure.

Tough to pick against “Perfect Sense, Part I,” but my favorite tune here is “Watching TV,” a heartbreakingly poignant take on the Tiananmen Square protests with some surprisingly effective guest vocals from Don Henley (the only saving grace of his career IMO. Yeah, “Boys of Summer” sucks too).

From the moment I first heard “Unsung,” which I’m guessing I saw on Headbanger’s Ball, Helmet’s major label debut became an album to save up my allowance and buy (quick side note – nothing will ever sound sweeter to me than the CDs I had to save for a month to be able to afford. Great music will always give me chills, but never again will I feel the blissful release of a record that lives up to my own, self-inflicted hype machine). And while the balance of Meantime didn’t possess anything quite as brutal as that amazingly simple riff, it was perfect for the kind of teen looking to project his weirdo angst on something harder and snarlier than Nirvana. Mixing the mammoth riffage and clipped shouts of Page Hamilton with drummer John Stanier’s deep-in-the-pocket breaks, Meantime was loud, nasty, groove-based hardcore, a sound that hurts just as good 20 years later. Sure, there’s plenty of pain-obsessed Trapper Keeper poetry – Hamilton’s jealous cheerleader screams of “You’re better … die!” being the lowest point. But the guitars are so punishing, and the rhythms so gut-punching, they would smother any attempt at refined lyricism like the runt of a litter.

Behold the brutal, brass tacks awesomeness that is “Unsung.”

“Words and guitar/I got it!” What better way to sum up the joyful noise of Dig Me Out than this chorus to one of its many unshakeable standout tracks? Sleater-Kinney’s third album, and first for Kill Rock Stars, provides equal helpings of molten punk shredding and bouncy British invasion melodies – it’s not a coincidence that its cover is an homage to The Kink Kontroversy. The record sounds for all the world like a trio of gals who love nothing more than plugging in and screaming their guts out. (Which reminds me, Screaming Females’ Ugly, one of my front-runners for the best album of 2012, would in no way exist if not for Dig Me Out.) This palpable exuberance is what makes Dig Me Out something special; instead of wallowing into lines like “I wear your rings and sores/In me, it shows,” singer Corin Tucker sets fire to them, her wild, quavering pipes proving that the death of grunge didn’t stop the Seattle scene from spitting out some startlingly talented, unpredictable voices. Of course, you can’t get by purely on energy. Dig Me Out is riddled with killer pop melodies, Carrie Brownstein’s shit-hot guitar playing, and deftly layered sequences that belie the whole garage band aesthetic – take “Words and Guitar,” where Tucker’s vocal devolves into a primal scream and Brownstein chimes in with a cheery backup vocal (“Can’t take this away from me/Music is the air I breathe”), all over a sun-kissed riff straight out of a Searchers song. Sleater-Kinney makes it all sound exhilaratingly simple, as sure a sign as any that we’re hearing a great band at its peak.

I’ve said enough about “Words and Guitar.” Get to listenin’.

When I was 14, I considered Ten to be one of the Great Rock Albums, on a level with Led Zeppelin II or Back In Black. But if you’ve read my introduction to this list, you’ll understand why I was nervous to listen to Pearl Jam’s monster debut front to back, for the first time in at least a decade – what Ten has inspired in its wake has been pretty horrifying. And I’d be lying if I said I didn’t cringe during “Once,” the album’s propulsive opening track. I can appreciate melodrama, but as Eddie Vedder growled “Once upon a time/I could love myself,” I realized how rough around the edges this gifted vocalist was in 1991. Vedder connected with listeners from the get because he sang with naked emotion, but on Ten, he often gets lost in these waves of feeling, his grunts and wails coming off almost comical. At the end of “Once,” Vedder lets loose his most heinous guttural burst (“YUH-HEA-HEA-YUH-HEA-HEA!!!!”), which I will now claim as the #1 reason Chad Kroeger, Scott Stapp and Chris Daughtry sound like they do. That’s all to explain why Ten is #71 on this list, instead of in the top 20. It remains a smorgasbord of killer guitar riffs, and is full of songs that shamelessly aim for arena nosebleeds, with none of the artsy experiments and ham-fisted politics that would make vs. and Vitalogy so uneven. And when Vedder calms down, his vocals are gorgeous – the ballads “Oceans” and “Release” are two of the album’s strongest cuts as a result. Then there’s “Alive,” perhaps the perfect example of how Pearl Jam combined the angst-ridden energy of grunge with the comfortable, crowd-pleasing tropes of classic rock – if you thought existentialist crises and guitar solos couldn’t mix, here’s your proof.

Eddie Vedder might’ve had some developing to do as a singer at the time, but on “Oceans,” his raw ability can’t be denied. An exquisite ballad that alone absolves him for his “hunger dunger dang”-related sins.