When I moved to Stephen King’s home state of Maine, I thought it would be fun (if a bit cliché) to finally read his books in earnest, and discover how I really feel about his work. For this installment, I took a flier on a lesser-known King novel that just happened to be $2.99 at the used bookstore – Bag of Bones.

What scares Stephen King? Based on what we’ve read so far in this series, we can make some guesses (e.g. cycles of abuse, bathrooms). But after reading his 1998 novel Bag of Bones, and looking into how his career was doing at that time, I think I may have uncovered the big kahuna: Tom Clancy.

In 1997, Penguin Books merged with fellow publishing giant Putnam, bringing King and Clancy under the same roof. At this point in his career, King couldn’t compete with Clancy’s mega-selling espionage thrillers. And he knew it. Here’s what he said to the New York Times in ’98: “I would like to sell. I wanted to have one more book that was big, that felt like I was running the tables in terms of sales. I wanted to knock Tom Clancy out of the No. 1 spot. Like Leonardo DiCaprio, I’m king of the world, even if it’s only for two weeks, whatever. I wanted those things.”

So it’s no coincidence that Bag of Bones is the story of a best-selling author in crisis. At first, it strikes a mournful, self-reflective tone that had me thinking King might actually pull this off. That this massively famous middle-aged man could use his fragile ego as the fuel for something meaningful.

His protagonist, Michael Noonan, has gotten rich writing cookie-cutter thrillers. But it bugs him that they only ever make the lower reaches of the best-seller lists. “If Tom Clancy were to go on hiatus for five years and then bring Jack Ryan back, he’d come back strong, no argument,” his agent warns. “If you go on hiatus for five years, maybe you don’t come back at all.”

When his wife, Johanna, dies suddenly, Noonan goes into a tailspin. He wanders through his Maine farmhouse, insulating himself from others, unable to write.

King is rarely better than when he’s writing about grief, and this is no exception. Like when Noonan finds an old W. Somerset Maugham paperback under the bed, with a playing card used as a bookmark: “It occurred to me that Jo was never going to turn the page and hear Strickland call the pathetic Stroeve a funny little man,” King writes. “I understood it wasn’t a mistake that would be rectified, or a dream from which I would awaken. Johanna was dead.”

If only this entire book had the tone of this quiet, heartbreaking realization. Alas, the lion’s share of Bag of Bones has little to do with it. It’s a panicked, overstuffed, perverted mess. When Noonan moves to his and Jo’s old lake house for a change of scenery, he is immediately swept up in a custody case involving a single mom and a monstrous octogenarian software magnate. Also, the lake house is haunted by ghosts that fight over the refrigerator magnets. Also, there’s a horrible secret that has something to do with an African-American blues singer named Sara Tidwell, whose family and entourage disappeared from this lake town around the turn of the 20th century.

Every single one of these plot points are like cotton balls in our ears, muffling the sounds of real human emotion that the author had so empathetically laid bare. Worse, the custody drama transforms into a romance that would make Woody Allen proud. Noonan comes to the rescue of 21-year-old Mattie Devore and her daughter Kyra, accidentally brushing against her boob the first time they meet, then not-so-accidentally fantasizing about her with uncomfortable intensity, then paying her legal fees for the battle with her cartoonish villain of a father-in-law. Johanna? She’s just one of several ghosts in the lake house, relegated to the background. 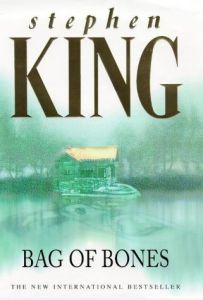 Ickiness aside, King is out of control here. Like the ghosts duking it out in the lake house, King’s tangled plot lines strangle any potential points that Bag of Bones could have made. What promised to be a story about harrowing grief and what constitutes fulfillment for a once-idealistic generation, becomes a literal bloody mess. King has to resort to a gruesome deus ex machina to prevent the Mattie/Michael relationship from going “too far.” And the Sara Tidwell secret is truly horrifying, and fairly offensive in how quickly it’s tossed in – like an extra tablespoon of lemon juice in an already sour cocktail.

Bag of Bones does have vestiges of what makes King’s best work resonate so strongly – especially the toxic grief that propels my favorite of his books, Pet Sematary. But for the first time in this column, I’ve seen just how thoroughly he can go off the rails. All evidence points to King going through some kind of crisis while writing Bag of Bones. At the very least, his obsession with sales was screwing with his artistic chemistry, as well as his public image. When his contract was up in 1997, King made the unusual move of going to the press, saying that he wanted a new publisher who would pay him the outrageous sum of $18 million a book. Nobody bit. That, after all, was Clancy money.

THE “CATCHING UP WITH KING” RANKINGS