When I moved to Stephen King’s home state of Maine in 2013, I thought it would be fun (if a bit cliché) to finally read his books in earnest, and discover how I really feel about his work. For this installment, I decided to tackle one of his more recent successes, the turd-of-an-idea-on-paper Kennedy Assassination/time travel epic 11/22/63.

“The crazy people of the world – the Johnny Claytons, the Lee Harvey Oswalds – shouldn’t get to win. If God won’t make it better after they do have their shitty little victories, then ordinary people have to. They have to try, at least.” –Jake Epping 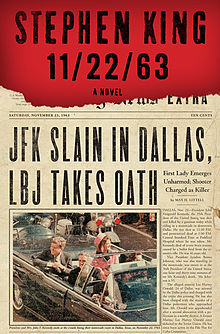 On my way to work this past winter, I hit a patch of black ice on a winding road. My car veered into oncoming traffic for a split second before I could reverse the skid and slam harmlessly into a snowbank. (Thank you, trio of no-nonsense Mainer-Samaritans who immediately pulled over to help.) Normally I would just take a deep breath and feel grateful. But I had just started reading 11/22/63, Stephen King’s 2011 door-stopper about the Kennedy assassination and the danger/pointlessness of asking “what if?” So I started thinking about what larger forces could be in play – did time itself want me to be late for work?

As the first late-period King novel that I’ve read for this series, I’m relieved to report that, at least here, he is not interested in trying new things. Nobody else could have written 11/22/63, a horror yarn with an intricately woven time-travel narrative that is also an epic love story and a work of research-intensive historical fiction. It strains in parts, especially toward the end when King engages in some clunky universe-splaining, including a post-apocalyptic alternate future where the scariest thing are the clichés. But so much of it is so completely engrossing that it qualifies as a towering accomplishment all the same. King doesn’t just make one of the most heavily trodden moments in our country’s history feel vibrant, and relevant, and new – he spends most of his time elsewhere, and never makes you feel like skipping ahead.

The hero this time around is Jake Epping, a floundering high school English teacher who comes off like a sad-sack Sam Spade – while recently divorced and not particularly happy with his lot in life, Epping talks almost exclusively in sharply honed, sarcastic quips, as if he hired a team of writers to zest up his daily banter. I’m not sure if King intended this in order to make his protagonist less likable, but that’s the effect it has, and it’s to the benefit of the story. Which really kicks into gear when Jake stops by his favorite greasy spoon to discover that its owner Al looks decades older than he did the day before. Turns out that Al has been living in the past, thanks to a time portal to 1958 that he discovered in the back corner of his stock room. He shows it to Jake, shares his plan to prevent the Kennedy assassination (now foiled by the cancer that forced the trip back to the present), and asks him to take over.

As far as sci-fi concepts go, this is some weak tea. The portal is a phantom staircase that you have to feel around for with your feet. It’s a rip in the space-time continuum that’s just hanging out, yet no one had discovered it before. Yet King is smart enough to know this. He wrings real suspense and horror out of Al’s “sudden” advanced sickness, and cares way more about the moral quandary at hand – if you had the chance to go back and prevent an atrocity, are you obligated to do so? All the time travel stuff is functional. The creativity is in the tension.

Of course, Jake eventually agrees to take the baton, spurred on by the desire to make things right for his school janitor, Harry Dunning – a victim of unspeakable childhood horror. And once he steps into 1958, the book rarely lets up. King takes his sweet time getting to that titular date, giving Jake a believable amount of time to adjust to a mid-20th century way of life. (He does a bit too much Boomer navel-gazing, opining about the great cars and all-natural foods and folksy store clerks blah blah blah. But we know the ’50s are his jam, so we’ll let it slide.)

The story of Jake trying to prevent the Dunning family tragedy could be a gripping short story on its own. It’s set in Derry, Maine, the fictional town from It. And like that book, it uses a black void underneath the town as a metaphor for the sicknesses and depravities that fuel abuse. Jake does what he sets out to do, but it’s nowhere near as easy – and as bloodless – as he hoped.

From there, the scene shifts to Texas, where Jake settles down as a teacher in the small town of Jolie, loving it to the point where he thinks about Kennedy rarely. When he meets the new school librarian, Sadie Dunhill, he starts to think about ditching the plan for good. Despite a terrible meet-cute that would make Kate Hudson roll her eyes – she’s just so clumsy that she falls … right into his arms! – King handles Jake and Sadie’s courtship with patience and tenderness. Their love is quiet, and sweet, and witty. It’s built to transcend adversities both physical and cosmic. The former comes in the form of Sadie’s psychotic ex-husband, whose presence looms as much as the president’s as the calendar flips over to ’63. The latter dovetails into the time travel narrative in a way that puts King firmly in the corner of believing in soul mates – a corner I’ve resided in for the last 15 years, making me susceptible as hell to loving all of this. Which I do.

I won’t go any deeper into the plot than this (there is a lot more of it). The Kennedy sequence is as riveting as you’d hope it would be. The closer we get to the Book Repository, the more brilliantly King casts Father Time as an omnipotent demon. But whether Jake’s in Derry or Jolie or Dallas, King is always making his point loud and clear – whether you’re nostalgic for it or haunted by it, it’s dangerous to live in the past. If you can convince yourself that there was a time where men didn’t terrorize their families, you’re probably unfit for life in the real world. (We tend to remember the cherry-red Chevys and Moxie sodas from the 1950s, and forget about the sickening hate.) And if you’re thinking hypothetically about the past, and wondering what you could have done differently to improve it? In King’s opinion, that is the most treacherous road.

By the end, it’s a lesson that Jake can’t heed. Because even when we don’t have a magic time-staircase at our disposal, leaving the past in the past is easier said than done.

Catching Up With King #1: Pet Sematary

Catching Up With King #2: The Shining

Catching Up With King #3: The Gunslinger