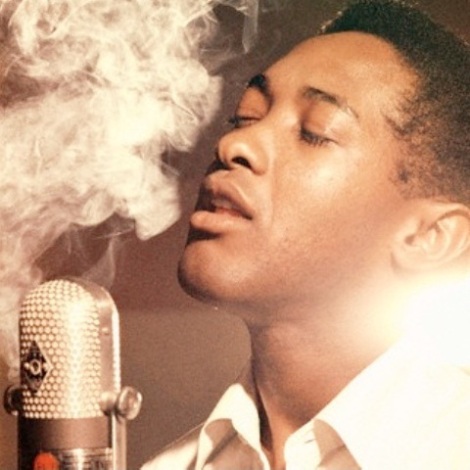 If you read my post yesterday, you massive global audience you, you know I’ve had the season premiere of Mad Men on my mind. The show’s exploration of mid-life crises is reaching new peaks of symbolic grandeur, and new depths of self-absorbed nihilism (e.g. an ad executive, wealthy from birth, complaining that life is nothing but a string of disappointments). With every new wincing cigarette pull from Don Draper, he’s seemingly one step closer to oblivion.

So when the Sam Cooke song “Smoke Rings” came on during my drive to work this morning, it felt like a cosmic pop culture connection – over a crooner-friendly, French horn-happy blues, Cooke ruminates about the product of his exhalations, like Draper staring into space on his Hawaiian vacation. “Please take me above with you,” Cooke pleads in the final refrain. It’s a gorgeously depressing idea, one that begs to play under the closing credits of this season of Mad Men. Start practicing that wince, and check it out here:

Don Draper stands silently by his office window, freshly tanned from a Hawaiian vacation, his desk moved by a photographer to a spot he doesn’t like. All he hears, and all we hear, are waves, gently crashing in his mind. Of all the memorable moments from Mad Men’s two-hour season six premiere – which run the gamut from harrowing to hilarious – this is the one that’s sure to stick with me for a long time.

Don has always been a character on the brink, a man with weighty secrets who nonetheless behaves recklessly, someone who treats women like garbage and then complains about how bad it makes him feel. But over the course of five seasons, we never got a good idea of what rock bottom might look like for our dashing anti-hero. “The Doorway” gives us our first glimpse, and it ain’t pretty – after embarrassing himself at a funeral (in a thoroughly entertaining way), Don demands that his doorman share details of a recent near death experience. “You must have seen something,” he pleads, with a lost, childlike daze in his eyes that he can’t entirely blame on booze.

While Don’s psychic breakdown is its main focus, the episode takes its title from a rant Roger Sterling gives to his psychiatrist, about how life is just a series of passageways that “all open the same way, and they all close behind you.” Roger’s the one dealing the most directly with mortality here; the death of a loved one and acquaintance bookend the episode. And while his incomparable wit and panache can’t keep his sadness at bay forever, Roger’s soliloquies on the couch provide clear-headed counterpoints to Don’s odd obsession with his physician neighbor – not to mention Betty’s fairly frightening obsession with one of Sally’s friends (not Glen this time).

All of these intertwined moments of existential crisis would be enough for a great episode of a lesser show, but “The Doorway” takes a moment to balance the scales a bit, showing Peggy Olson on the phone with her old art director Stan Rizzo, each making the other’s late night at work more bearable. When Peggy’s new boss compliments her on her crisis management skills, Stan’s listening in. It’s a sweet and funny moment in a blossoming friendship – the kind of thing that makes a good argument against Roger’s doorway theory.

As Mad Men has progressed, it’s revealed itself as a show that’s less about advertising, and more about the hard truths of existence that advertising was invented to distract us from. “People will do anything to alleviate their anxiety,” Dr. Rosen imparts to Don, before whisking off on his urban skis to save lives on a snowy New Year’s Eve. For two more seasons, it looks like we’re in for a whole new level of “anything.”