Not only did I have the pleasure of reviewing The Four Tops’ affirmation of a show at the Erie County Fair, I also had the pleasure of meeting the quartet before the gig. As I settled in to have my picture taken with the guys, I mentioned that “Bernadette” gives me chills (I know, I’m a drama mama), to which Lawrence Payton, Jr. responded, “Man, she gives me thrills.” It wasn’t surprising to learn that these dudes are smooth customers – with only one original member remaining (first tenor Duke Fakir), the other three Tops have to ooze personality and chops to live up to the legacy of the Motown legends they’re replacing. Which they did with conviction on this night, flying through one crossover R&B masterpiece after another, the melodies as irresistible as ever, the arrangements still exciting and imaginative, the lyrics simple, sweet and true.

“Loving You Is Sweeter Than Ever” was a great choice for an opening song – a gorgeous example of the group at its mid-’60s best, but an underappreciated one for sure. Moving forward, though, the Tops knocked down one massive hit after another, with a four-piece band and eight-piece horn section providing the ballast for those achingly good four-part harmonies. “Bernadette” was a total winner, thanks to lead singer Theo Peoples belting every word like a man possessed and keyboardist/conductor George Roundtree leaning into some driving piano chords. And the TLC inherent in the performances of “Baby I Need Your Loving” and the closing “I Can’t Help Myself” made it seem like these guys are somehow not tired of singing them. As the latter’s wonderful bass line kicked in, and the Tops gave the first chorus to the crowd to sing, you got a sense of what it must have been like to experience music like this for the first time. No wonder teenagers were passing out in their seats back then.

Stevie Wonder – Music of My Mind
A bridge between Stevie’s hit-making wunderkind days and the epochal envelope-pushing of his mid-’70s masterpieces, Music of My Mind languished on my CD rack for a decade, always passed over for the darker, more ambitious Innervisions, the conceptual grandeur of Songs in the Key of Life (my knee-jerk pick for The Greatest Album of All Time) or a killer single like “Signed, Sealed & Delivered I’m Yours” (tied with “God Only Knows” for my knee-jerk pick for The Greatest Song of All Time). But for whatever reason, it’s found its way into heavy rotation for the first time, and thank god for it. In a way, it’s the ultimate Wonder album, an organic fusion of the carefree bliss of the early years and the heady funk and spiritual R&B of albums to come. The seven-minute-and-change sunshine funk masterpiece “Love Having You Around” opens things, setting the tone for a record dominated by themes of the joy and tenderness that true love brings. The songwriting and production is jarringly advanced from the poppier stylings of Signed, Sealed & Delivered, released just a year previous. And when the mournful notes of the closing track “Evil” fade from your speakers, leaving you to contemplate what shadowy force empowers the enemies of love, it becomes obvious that on Music of My Mind, Stevie Wonder was “Little” no more.

Metallica – Master of Puppets
Master of Puppets was my favorite album when I was 14. A few years later, I fancied myself a music connoisseur, a period during which I sold back a pile of dangerously awesome metal albums, including my entire Metallica collection. Having recently re-purchased this timeless piece of relentless, blistering thrash, I’ve gotta give my 14-year-old self some props. The title track is gloriously self-indulgent, shifting tempos, rhythms and time signatures with hairpin accuracy, with James Hetfield’s anti-war sentiments bludgeoning listeners with as much force as Kirk Hammett’s legendary riff. Damn, there isn’t a weak cut here. “Battery” and “Damage Inc.” are bloody-fingered, double bass drum-punishing assaults that put headbangers on cloud 9; “Welcome Home (Sanitarium)” is a high-drama metal opus that makes insane asylums seem almost cool; the prog-rock instrumental “Orion” needs no growling or screaming to glue metal fans to their seats. When I first fell in love with Master of Puppets, its fusion of wild sonic hellfire and advanced rock craftsmanship had a mainline to my soul. But I also loved Jackyl in those days, which means my soul was also kind of stupid. 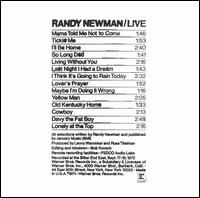 Randy Newman – Live
This album was my first exposure to the man who would become my favorite singer/songwriter (sorry for all the hyperbole in this post, it’s just turning out that way. Plus, I’m wicked drunk on Zima right now). And while one of Randy Newman’s inimitable qualities is his imaginative orchestral arrangements, I’ve always preferred the way he sounds on this release, a selection of tracks recorded at a pair of 1970 Newman solo performances at the NYC club The Bitter End. He performs cuts off his first two albums (like the twisted sexual satire “Mama Told Me Not To Come” and the I’m-lonely-in-a-crappy-apartment ballad “Living Without You”), material off of the forthcoming wonderment Sail Away, and a pair of sweet, ingenious songs about awkwardness in the bedroom that never appeared anywhere else – “Tickle Me” and “Maybe I’m Doing it Wrong.” And as pretty as the strings are on the original recording of “I Think It’s Going to Rain Today,” it doesn’t hold a candle to Newman’s performance of it here, which embodies a sky streaked with grey with tear-welling poignancy. Capturing the sweet and sardonic sides of this artist with fly-on-the-wall starkness, Randy Newman Live is the kind of record that makes you thank god the tape was rolling.