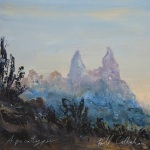 I’m a sucker for a singer with a deep voice. And with his third solo effort, Apocalypse, former Smog leader Bill Callahan’s pipes are so entrancing, he’s got a better chance of laying me down by the fire than Barry White ever did. This seven-song arc of sparse, haunted folk connects the dots between the stately isolation of cattle drivers and touring musicians, compares lost loves to wildflowers, and gives guilt-ridden Americans a mantra to soothe their bruised patriotism – “Everyone’s allowed a past they don’t care to mention.”

I’m sure R. Kelly’s reasoning for the concept of his 10th album – a squeaky-clean collection of retro-minded love songs – wasn’t purely artistic. But although you can feel the fingerprints of his publicist all over Love Letter, from the “I’ll be loyal and true” message of every track to the Kelly-as-Ray Charles homage on the album cover, the music here is exceptional. Freed from the silly posturing and cringeworthy innuendo of his earlier work, Kelly just focuses on singing here – and his voice isn’t just supremely silky, it’s versatile, aping MJ’s pop outbursts on “Not Feelin’ the Love,” carrying the ’70s Motown balladry of “Just Can’t Get Enough,” and cutting loose at just the right moment on the staggering “When A Woman Loves.”

You could make the argument that this isn’t an essential Everly Brothers album. It was a bit of a contract fulfiller, recorded during a time when the duo couldn’t get access to material from Felice and Boudleaux Bryant, their songwriting muses who were responsible for most of their timeless hits. But separate these sessions from the history, and you get one of pop music’s all-time great interpreters of country & western, tackling a dozen gems of the genre. Phil and Don’s harmonies are as transcendent as ever over the light rockabilly of “Just One Time,” the bar band balladry of “Please Help Me I’m Falling,” and the soaring “Sweet Dreams” –  a tune they were meant to sing if there ever was one.