10. Phosphorescent – Here’s To Taking It Easy
Last year, Phosphorescent released To Willie, a straightforward set of Willie Nelson covers. It stands to reason that fans who’d gotten hooked on the band’s cryptic dream-folk stylings might’ve had trouble connecting the dots. Which could very well be the inspiration for Here’s To Taking It Easy, an artful distillation of the two approaches that’s equal parts sweet, lazy country and deep, introspective indie rock. Bandleader Matthew Houck gives his ambitions a rain check here, opting for words and arrangements that sum up where he’s been – touring like crazy, destroying his relationships, then touring some more. The saloon-ready pedal steel and driving horns of “It’s Hard to be Humble” shows he’s not over his Willie obsession, while the haunting mantra “Hej, Me I’m Light” could be a Pride outtake. And “Los Angeles” closes things with a clear-headed swipe at our fame-obsessed culture – “Are they covering you up with affection now?/Are they giving you a lot of attention now?”

9. LCD Soundsystem – This Is Happening
On This Is Happening, LCD Soundsystem’s third straight slab of epic, confessional dance-pop, there’s much of what you’d expect – immersive walls of synths, cold-light-of-morning musings, and a thunderous beat or two. But there’s something new lurking in the impeccably produced weeds, a sense of tension that finds James Murphy writing some of his catchiest material, while simultaneously rebelling against the concept of pop. “You wanted a hit/But maybe we don’t do hits,” Murphy posits on one especially hook-filled tune, which he stretches to a 9-minute running time, stacking ironies and keyboard sounds with equal fervor.

8. Erykah Badu – New Amerykah, Pt. Two: Return of the Ankh
On her fifth album, and second installment of the awkwardly named “New Amerykah” series, Erykah Badu gives us her most commercially viable music of the last decade or so. That’s not to say it’s the kind of glossy, over-emoted sludge that passes for R&B these days – Return of the Ankh goes down easy, but it’s because Badu and her band make these breezy soul grooves look easy. A significant shift from the challenging sprawl of New Amerykah, Pt. One: 4th World War, Ankh begs to be pulled out during the summer months. With the airy funk of “Turn Me Away (Get Munny)” and the slow-burning ode to solo travel “Window Seat” drifting from your speakers, you’ll almost be able to smell the barbecue.

7. Robert Plant – Band of Joy
After the initial shock of Raising Sand, on which Robert Plant sang with a tenderness and clarity he’d only hinted at in the past, it made complete sense that this artist would spend the twilight of his career as a sublime interpreter of classic Americana. Nobody ripped off American blues masters quite as brazenly as Led Zeppelin, and some of Plant’s best work with that band was on its occasional forays into folk and country. With Band of Joy, the legend puts an exclamation point on this revelation, as Plant assembled a Grand Ole Opry-worthy band to help him take on traditional folk tunes and modern numbers by artists like Los Lobos, Richard Thompson and Townes Van Zandt. The result is earthier than Raising Sand, with less focus on harmony and more of a live in the studio feel. Which isn’t to say it’s not beautiful – whether it’s among the echo chamber guitars of “Silver Rider” or the ominous acoustics of “Satan Your Kingdom Must Come Down,” Plant’s voice enchants. 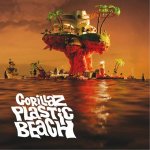 6. Gorillaz – Plastic Beach
Ever since Damon Albarn’s band of animated hipsters released its self-titled debut in 2001, Gorillaz has felt like a lark, a fun side project that let the artist scratch his hip hop itch. But listening to the wildly eclectic sounds, indelible melodies and post-apocalyptic concepts of Plastic Beach, it’s clear that Albarn has realized that his “other” band is the one he was meant to lead. On paper, the formula is pretty much the same as the first two Gorillaz discs – get a crackerjack group of guest artists and let them run wild over chilled-out electronic grooves. But for the first time, the songs are as adventurous as the guests, full of moody Britpop atmospheres, burbling funk jams, aching bursts of R&B and full-on orchestral bombast. “White Flag” acts as a microcosm of it all, combining the hypnotic Eastern melodies of The Lebanese National Orchestra with bursts of playful electro-rap. And when Albarn follows it up with the post-punk ballad “Rhinestone Eyes,” singing about how his love’s peepers glitter “like factories far away,” it becomes clear that there’s nothing at all cartoonish about these Gorillaz anymore.

5. Vampire Weekend – Contra
Oh, it could be so easy to blow off Vampire Weekend, what with their songs about aristocrats, diplomat’s sons and girlfriends’ trust funds. But perhaps because of its unabashed approach to upper crust tropes, Contra possesses a freshness that only a hater wouldn’t acknowledge. Of course, ambitious, effervescent pop hooks make any hyper-educated rich kid lament go down easier, and Contra is stuffed to the gills with ’em, from the falsetto-laden Afro-pop of “White Sky” to the M.I.A.-sampling electro-ska of “Diplomat’s Son.” And tell me one band that’s doing anything like “California English,” where singer Ezra Koenig ponders the deeper implications of using Tom’s of Maine toothpaste in an AutoTune-corrected voice. These kids might be spoiled, but their art is built to last.

4. Jamey Johnson – The Guitar Song
A double album from the guy who co-wrote “Honky Tonk Badonkadonk”? Sounds like something whipped up by the Satan of my own personal hell. But there ain’t nothing trendy or empty-headed about The Guitar Song, a robust collection of songs with roots in traditional country and production values that gleam like an oil soap-polished bar. Don’t be fooled by the record’s “Black” and “White” subtitles, because Johnson’s interested in grey areas. Whether he’s singing about heartbreak, the plight of the modern farmer or breezy afternoons on porch swings, there’s either a resiliency behind the sadness, or the sense that real happiness is earned. Through it all, the pedal steel licks soar and mourn, the pianos dance in dark corners, and every word is soaked in Johnson’s elegant, commanding baritone.

3. Janelle Monaé – The ArchAndroid
An over-the-top cinematic intro segues into an Outkast-meets-Gloria Estefan barnburner, which segues into an equally propulsive dance floor cut on which the vocalist confesses she’s “shaking like a schizo” over sped-up jazz guitar licks. These are the first three tracks of The ArchAndroid, Janelle Monaé’s concept album about cyborg clones, time travel and futuristic psycho wards. It was the most exciting beginning to an album in 2010, setting a standard that would be tough for Aretha to match for 18 tracks. But Monaé almost does it, thanks to an unflagging creative spirit – from the Willy Wonka strings of “Neon Valley Street” to the English folk melodies of “57821” and the light-as-air romantic pop of “Oh, Maker,” The ArchAndroid is a Baskin Robbins of sonic imagination. If it wasn’t for the out-of-place Of Montreal collaboration “Make the Bus,” we’d be talking perfection here. Still, this is a dizzying accomplishment, one that puts Monaé on a short list of artists who can push the envelope and cross over in the same supercharged breath.

2. The Roots  – How I Got Over
We’ve always been able to count on The Roots to deliver top-notch, head-bobbing grooves and smart, fiery verses – they’re probably the most consistent outfit in hip-hop. But with How I Got Over, these guys haven’t just kept things fresh; they’ve upped the ante. A powerful, nuanced concept album about overcoming all that life can hurl your way, it thrills on first listen, and only becomes more rewarding the more you hit repeat. By masterfully blending their two main stylistic approaches – warm, Native Tongues beats and chilling, confrontational synth-funk – the band is able to paint a thoroughly convincing picture of self-doubt evolving into self-confidence. Black Thought rattles off a laundry list of natural disasters over the gloomy piano chords of “Walk Alone,” but by “The Day,” guest vocalist Blu is looking in the mirror and realizing, “I should start living today.” Moving stuff, in both senses of the word.

1. Kanye West – My Beautiful Dark Twisted Fantasy
The American Dream ain’t what it used to be. It’s more about power than picket fences. But I’ll stop trying to define it, because Kanye West has created the ultimate tutorial – his fifth album, My Beautiful Dark Twisted Fantasy. In lesser hands, this treatise on the glories and pitfalls of being crazy successful could sound like a Republican Party platform speech. But West’s combination of honesty, outrage, ego and phenomenal wordplay transforms the concept into an irresistible Jekyll and Hyde tale. He describes himself as a superhero and a monster, preaching that “no one man should have all that power” on his first single, while boasting “my presence is a present, kiss my ass” on his second. He’s never been this emotional on record, but he doesn’t let it stop him from writing battle-ready rhymes – for all of the wild psychoanalysis going on, one of the biggest highlights is a Family Matters reference (“Too many Urkels on your team/that’s why you’re wins low”). Musically, MBDTF is just as compellingly schizo. “Dark Fantasy’s” gospel chorus asks “can we get much higher?” Rocky soundtrack-ready synth horns propel “All of the Lights.” The slinky, Smokey Robinson-sampling “Devil in a New Dress” hearkens back to the College Dropout formula. “Monster” is an old-school rap feast, packed with top-notch guests (including a world-beating verse from Nicki Minaj). The result? The most brilliantly produced, fully realized musical vision of 2010. For hip-hop fanatics, casual pop listeners and party animals alike, it’s a garden of earthly delights – lush, intoxicating, and laced with nightmares.