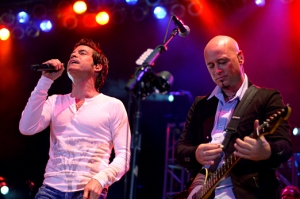 I had the unenviable task of reviewing Train on Tuesday night, a band whose hyper-polished, pseudo-spiritual rock has made for some of the worst singles of the last decade or so. I went in with an open mind, though, hoping that their live set was a more organic and enjoyable thing – if those ubiquitous melodies were executed in an honest way, it could have made for a bit of a good time. Not so, sadly. Not only was Train going through the motions during their Town Ballroom set, but its singer, Patrick Monahan, fancied himself a sarcastic card with a voice of an angel. He began the horrifically saccharine ballad “When I Look to the Sky” by asking the crowd to quiet down so he could sing a cappella, without a mic. It was a nice idea, don’t get me wrong – a gift from a singer to his fans that you rarely get at big rock shows. But when it’s done with this kind of material (“Sky” is clearly inspired by Richard Marx’s “Right Here Waiting”), it’s just gross. When it comes to every aspect of the artistic process, from songwriting to recording and performing, Train isn’t interested in leaving the cozy confines of their modern rock station.