Hello, Oscar junkies! We’re only two days away from that global TV event that’s just like the Super Bowl, except you watch what’s in between the commercials instead! Usually this is the place where I bemoan the bland/whitewashed/Hollywood-worshipping nature of the odds-on favorite. But I have some reasons to be hopeful this year, and goddammit I’m gonna make the most of it.

Reason #1: Upsets are a thing now

For two years running, the expected winner has lost. Spotlight beat out The Revenant in 2016, and last year, Moonlight upset La La Land.

It would be ignorant to expect Academy voters to be seriously swayed by the #TimesUp, #MeToo and Black Lives Matter movements. One Moonlight nod does not erase 89 years of American Beautys. But notions of equal representation in film have never been so prominent. An optimist could assume that in this revolutionary new context, one might think twice about voting for Three Billboards Outside of Ebbing, Missouri, the movie version of every think piece that told us we need to empathize with blue-collar Trump voters.

Reason #3: Reasons to have Oscar optimism don’t come along every day.

I’m still smarting from Crash beating Brokeback Mountain over here. So let me have my moment and predict a win for Get Out, the most relevant, intensely entertaining movie I saw in 2017. I really think it will happen! What the hell is wrong with me?

While I’m surfing this newfound wave of Oscars optimism (a.k.a. “riding the golden man”), why not talk about the movies that I’d nominate for Best Picture? Here’s the list, in alphabetical order:

Call Me By Your Name

Call Me By Your Name looks like how falling in love feels. Luca Guadagino’s sumptuous coming-of-age story wrenches every drop of chlorophyll out of its Italian countryside setting. As our main character Elio finds strength, encouragement, and exhilarating joy in his budding relationship with his father’s assistant Oliver, Guadagino fills our eyes with lush vegetation, fresh water and bountiful fruit. Their happiness is palpable, and Elio’s father notices. And what he eventually tells his son is a lesson in how all such love should be treated – as a precious resource, given all the freedom in the world to grow.

This slow-burn Irish horror film is like its protagonist Sophia – determined, patient, and in search of something extraordinary. Writer/director Liam Gavin spends a majority of his first feature letting us wonder about the schlubby occultist hired by Sophia to summon her guardian angel, using a real-life ritual called the Abramelin Operation. Is it all for real? Or is he just some creep? When we finally get our answer, so does Sophia, who rises like a phoenix from her grief, surrounded by a level of visual splendor that must’ve taken a lot of willpower to save for the end.

Every horror fan has found themselves urging a character to leave the dark basement/ancient burial ground/abandoned mental hospital they’re bravely wandering around in. In Jordan Peele’s prescient “social thriller” Get Out, that dangerous, haunted place is America. It’s the story of Chris, a black man meeting his white girlfriend’s parents for the first time. What happens on this family’s finely manicured home turf is a terrifying, crystal clear allegory for our country’s twisted obsession with the cultural and physical appropriation of an entire race. In this idyllic little hamlet, there are most definitely not very good people on both sides.

“What if Groundhog Day was a slasher movie?” sounds like one lazy-ass pitch. But that perfectly describes Happy Death Day, which turned out to be a clever rumination on the weight of social pressure on young people. As our main character Tree finds herself in a time loop that always ends in murder, she gains more self-confidence with each repeated day. She’s more true to herself in public; she takes time to process her grief; she investigates, and successfully unmasks, her murderer. Refreshingly unpredictable, empathetic and self-aware, this is something I’d happily experience again. And again. 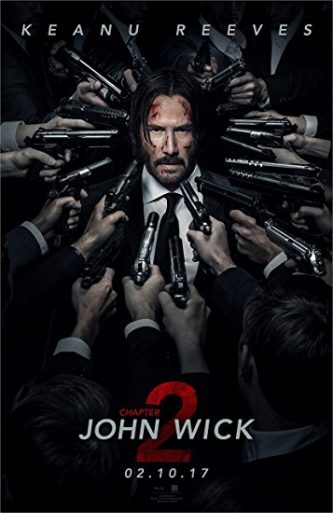 Gone are the days of Commando, where the relationship between John Matrix and his daughter is established by the end of the opening credits, leaving as much time as possible for quippy, campy carnage. But the second installment of the John Wick series contains some echoes of that 1980s no-nonsense muscle. Keanu Reeves returns as the titular grieving husband and dog lover, and it only takes a few minutes for him to be on the run from hundreds of highly trained, heavily armed vigilantes. It’s one extended action sequence after another, blocked with the style and precision of ballet – bodies undulating through space, armories akimbo.

The Killing of a Sacred Deer

Director Yorgos Lanthimos makes this list for the second year running, with this deeply disturbing tale of a troubled teen leveraging a doctor’s warped priorities to wreak havoc on his family. Lanthimos’s characters all talk in stilted, disinterested monotones, resulting in a funhouse mirror abstraction of suburban life that shifts from awkwardly hilarious to intensely chilling as the film unfolds. Barry Keoghan gives an unforgettable performance as the vengeful, blackmailing, child-poisoning Martin. Colin Farrell and Nicole Kidman relish their chance to play Martin’s socially stunted victims. By the end, the story gets as dark as anything I saw in 2017, without ever striking a tone that wasn’t completely its own.

The main character of Paul Thomas Anderson’s intoxicating eighth feature is Reynolds Woodcock, the head of a couture fashion house in 1950s London. Or at least, that’s how most people see him. Until he meets a waitress in a country pub named Alma, who sees him entirely. There’s a reason why a central crisis in Phantom Thread involves a wedding dress. It’s a story about marriage, and the very specific kinds of human synergy that make the the most successful ones work. Anderson gives Alma and Reynolds a push-pull narrative that reaches a level of intensity others could see as grounds for divorce. But for this particular husband and wife, there couldn’t be anything more nourishing.