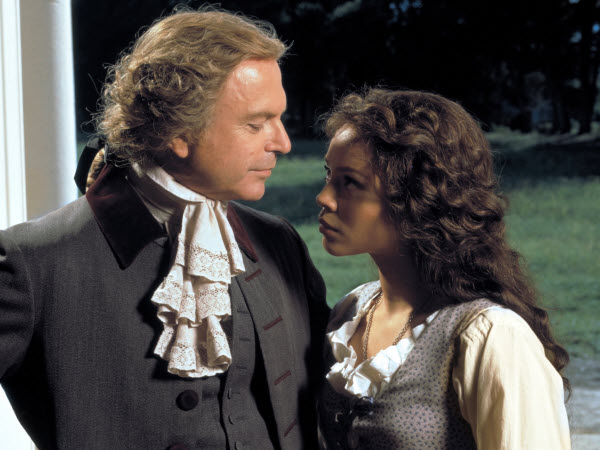 Is there a more underrated actor out there than Sam Neill? Not quite a leading man type, yet more substantial than a character actor, Neill tends to avoid Oscar-bait-level emoting, preferring a subtle, intangible kind of humanity that rarely feels out of place in a role – whether it’s an archeologist who can’t believe his eyes, a repressed frontiersman in colonial New Zealand, or a grieving parent framed by some devious-ass dingoes. Notice that I said “rarely” out of place. That’s because I recently watched Sally Hemings: An American Scandal, a 2000 Hallmark Channel mini-series that featured Neill as Thomas Jefferson. SH:AAS is as cheap and flimsy as its title would suggest, possessing all the hallmark touches we’ve come to expect from a Hallmark Channel project, save a subplot where a nice single mom finally finds love with Santa’s hunky-yet-approachable nephew. So here’s what I learned:

You see, Thomas Jefferson is at this party in Paris, and Sally Hemings shows up with her brother Mario Van Peebles. When Jefferson lays his eyes on her, he wonders aloud about who this girl could be, clearly thinking she’s some Parisian debutante he somehow hadn’t met before. But in reality, she’s his 14-year-old slave! There’s a wacky misunderstanding for ya! Don’t you just love love?

I’m clearly not an expert on Jefferson or Hemings, ’cause I used to just assume that their relationship probably wasn’t much like the kind of love affair you’d see in an Audrey Hepburn movie. But Sally Hemings: An American Scandal set me straight on that, depicting their initial time together in Paris as the kind of coy May-December flirtation we saw from Hepburn and Bogart in Sabrina. And instead of running away to Paris like Linus and Sabrina do in that beautifully impulsive way, our star-crossed lovers run away from Paris back to the U.S., where everything turns out great! If only Billy Wilder had stuck with his original ending, where Linus has a surprise waiting for Sabrina in France – a life of endless toil on his Parisian brie plantation.

3. Sally Hemings could’ve left Monticello at any time, but she didn’t, because love.

At the end of Sally Hemings: An American Scandal, something scandalous actually does happen – Hemings (played by Carmen Ejogo, who gives it her best shot I guess) reveals a note in Jefferson’s handwriting that grants her freedom. A note that was written decades earlier in France! Which means that she chose to live as a slave, to have six children by a man who would never acknowledge them, not to mention acknowledge her entire race as being 100% human. Not that I’d question the integrity of this project, but according to a study by the Research Committee On Thomas Jefferson And Sally Hemings (conducted the same year SH:AAS was released), there is no written record that Hemings was ever granted freedom. Even after Jefferson’s death, she “would have been recognized as free in her local community but, without any legal ‘free papers,’ she could not have safely left the neighborhood where she was known.” Well, you know what, Research Committee on Thomas Jefferson and Sally Hemings? You can shut your faces, because this ain’t the History Channel we’re talking about. This is the motherfucking Hallmark Channel, and on the Hallmark Channel, it’s all about the love – the bubbly, inspirational, slave-on-president love.

4. Thomas Jefferson couldn’t have fathered Sally Hemings’ kids, because he lived in the sky. 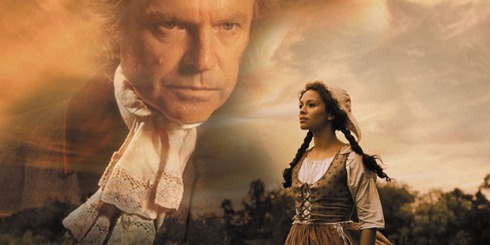 Going by what I’ve learned from TV miniseries, John Adams was a colorful, highly influential, endlessly interesting figure in American history, and Thomas Jefferson was a guy who wore wigs and went to things in them. Neill plays Jefferson – one of the more eccentric and compellingly contradictory Founding Fathers – like a less enraged Alistair Stewart, his quiet, emotionally log-jammed jealous husband from The Piano. He gets a little fired up when other men seek Sally’s affections (remember about all the true love?), but over the course of the THREE HOURS of the miniseries, this Hallmark Jefferson is little more than a wallflower. Even when he’s signing the Louisiana Purchase, or teaching youngins in his old-guy makeup, or bemoaning the loss of Monticello to his debtors, it’s clear that only one thing could interest the great Sam Neill during this shoot – his paycheck.