Before 2019, it was a sketchy proposition for a Very Important Filmmaker to Grapple with Their Own Mortality on screen. Because there are few people on earth as egomaniacal as a famous director having a midlife crisis. How can we expect them to resist the urge to wallow in their own pretentiousness? This is the urge that drove Stanley Kubrick to make Eyes Wide Shut, one last exercise in justifying his own perversions before his soul could be judged. The Tree of Life made us weigh the minutiae of Terence Malick’s childhood against the literal creation of the universe (I’m sorry that your dad was an asshole, but come on, dude).

But last year was different. It featured plenty of high-profile filmmakers tapping into that ol’ existential wrestling match, and at least three of them held their own egos in check, telling stories brimming with genuine, relatable pathos – along with all the tenderness and pain and humor and philosophical profundity that implies. Two of these, Martin Scorsese and Pedro Almodóvar, even racked up Oscar nominations. The third, David Milch, is a TV guy who used the unlikely return of his finest show to say something incredibly meaningful about endings.

So as we near the end of yet another Oscar season, praying to God that it doesn’t embarrass us too much (please Lord, don’t encourage the makers of Joker any further) and that the good art gets rewarded (Parasite, Antonio Banderas, Florence Pugh, The Lighthouse’s cinematographer), let’s focus on an unlikely, lovely fact – these 2019 films about old age and disease and death left me feeling especially alive, each in their own way. Now, without further ado, are My Best Pictures: 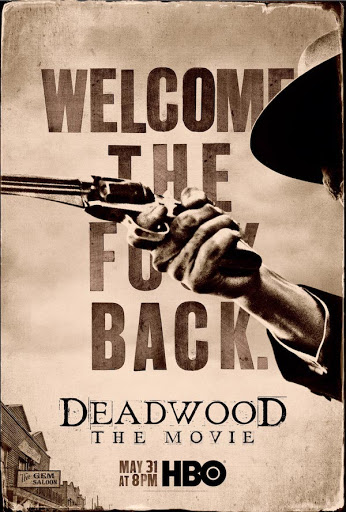 Thirteen years after HBO unceremoniously cancelled his signature show – the curse-jar-shattering Shakespearean Western Deadwood – showrunner David Milch was finally granted the opportunity to give us all a sense of closure, in the form of one made-for-TV movie. And he did it in the midst of unimaginable personal turmoil, having been diagnosed with Alzheimer’s a year earlier. Somehow, his script for Deadwood: The Movie packs a season’s worth of story into 120 minutes, without sacrificing the show’s penchant for loose banter and heavy soliloquy. A plot involving the return of the slathering wolf George Hearst, who discovers how he was hoodwinked a decade ago by our ragtag murderin’ pals, provides plenty of dramatic tension. But more importantly, it creates pockets of space for director Daniel Minahan to recreate the familiar, mud-smeared thrum of a town living on a knife’s edge. While giving almost every surviving cast member their own lovely curtain call. When Ian McShane delivers his final words as the abusive monster/loyal friend Al Swearengen, we get one last shot of profane, blasphemous poetry. And then it’s closing time, for good. 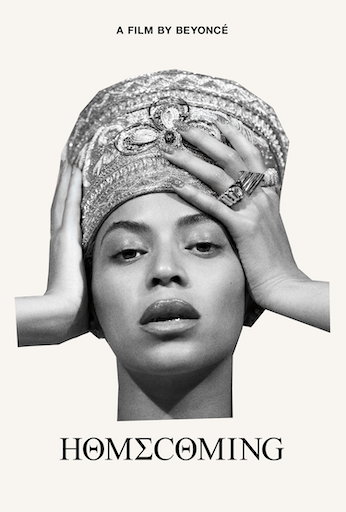 Just like a great drama has to offer more than just drama, a great concert film has to give us more than just music. And Homecoming, Beyoncé’s tour de force documentary about her instantly iconic 2018 Coachella performances, is one of the greatest accomplishments of the genre. Because this supremely motivated superstar approached the task of directing with as much tireless effort and conceptual flair as she applied to the stage show itself. As the first black woman to headline White Privilege Woodstock, Beyoncé embraced a theme of education, employing the marching bands and color schemes and resilient legacies of Historically Black Colleges and Universities, amplifying how rare it is to see unfiltered depictions of black culture on stages this large in America. Via a riveting series of cinema verité-style behind-the-scenes interludes, we get a real sense of how much work goes into a choreographed production of this size, of how easy it could be for its star to forget about cultural impact and just focus on the Herculean task of recovering from her pregnancy and hitting those umpteen-thousand cues. But her whole point of showing these rehearsals, of giving a voice to her dancers and drummers and designers, is to show us how hard her community works. So when we inevitably see this impossibly talented person singing about being crazy in love, while being surrounded by her artistic, cultural, and biological families, that love feels all-encompassing enough to shelter us all. 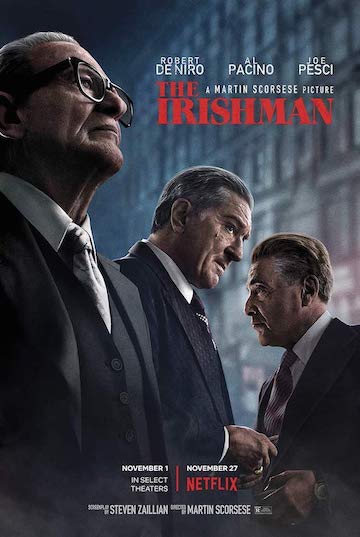 Like most mob movies, The Irishman is sprinkled with moments from the lives of practicing Roman Catholics – well-attended baptisms; ornate weddings; wrenched expressions of guilt; naked pleas for forgiveness. But the theology behind Martin Scorsese’s 26th feature is, if anything, more Buddhist. By following the corpse-strewn path of real-life hitman Frank Sheeran (Robert De Niro, speaking volumes with every wince) in minute detail, the director asks his audience to meditate on the long-term damage of each heinous act. To consider the metric ton of bad karma slowly being amassed. And to consider, silently and unblinkingly, the wretchedness it causes. Sheeran’s hits aren’t captured with elegant tracking shots – they’re abrupt and impersonal, a decidedly inhumane transaction. Obituaries of random characters pop up from time to time, blunting any swagger they might have in that moment with the fact of their grisly demise. What little romanticization there is comes from Steven Zaillian’s crackling script, which makes these criminals much funnier than they likely were. Coming from the likes of De Niro and Pesci and Keitel, this dialogue, along with the walking-and-talking Chekov’s gun that is Jimmy Hoffa (Al Pacino, spittin’ mad), kept me rapt past hour three. Just in time for Scorsese to show us what comes of all that greed and political maneuvering and emotionally barren tough-guy bullshit. It sure as hell isn’t nirvana. 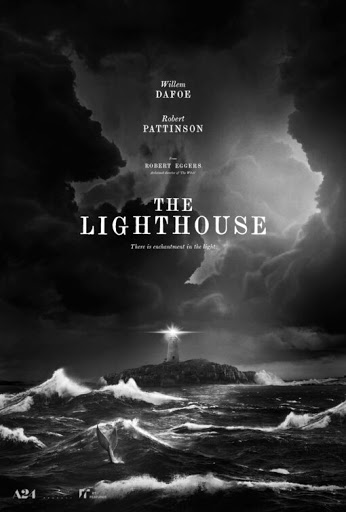 When my wife and I moved in together, it was into a studio apartment that would’ve been cramped for one person. The “bedroom” was a ladder to a wooden pallet installed a foot below the living room ceiling. The shower was like a leaky coffin. There were rats, and those rats had fleas. In case I ever forget how lucky I am to have found someone who could live in such a shithole with me without killing me, I will watch The Lighthouse and let the waves of gratitude pour over me. Robert Eggers’s ominous, patient, quite-funny masterpiece of psychological horror shows us what happens when two incompatible people get thrown into close quarters with no chance of escape. When Ephraim (a briskly mustachioed Robert Pattinson) lands on an isolated New England island to work as an assistant to the head lighthouse keeper (Willem Dafoe, a bug-eyed, farting Lear with a beard like a cartoon lion), they pass the time by getting plastered, telling stories, and generally trying their hardest to manage how annoyed they are. When it becomes clear that their scheduled transport off the island is not arriving anytime soon, things get a whole lot weirder. The actors both do some incredible work depicting how need can so easily turn to resentment, which slowly pickles into rage. Often, it’s unclear if they are going to kiss or kill one another. By the end, they’ve broken all kinds of leases, including the one so cruelly granted to them by God. 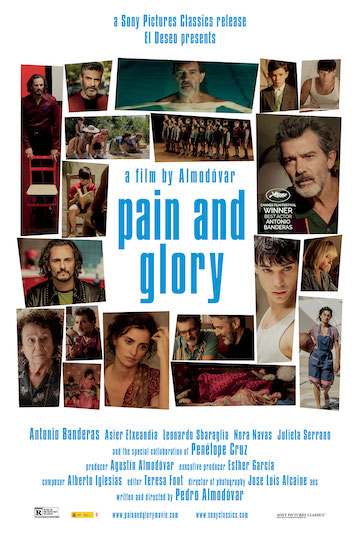 I don’t know if I’ve ever heard a more moving encapsulation of the relationship between pain and religion than this line from Pain & Glory, Pedro Almodóvar’s nostalgic, bittersweet, overwhelming visual feast of an autobiography: “The nights that coincide several pains, those nights I believe in God, and I pray to him,” shares Almodóvar stand-in Salvador Mallo (played with electrifying vulnerability by Antonio Banderas). “The days when I only suffer a type of pain – I’m an atheist.” The film follows Mallo around Spain as he reconnects with old colleagues and lovers, his nostalgia receptors sparked by a local revival of one of his earliest feature films. Reminiscing all the while about his complicated relationship with his mother – the person he worshipped as a child, whose stubborn homophobia caused him great pain as an adult – Mallo feels finished, a husk of what he once was, assaulted from all sides by headaches and back pain and choking fits. Even at his lowest, Almodóvar can’t help but make every shot feel like a painting that would change your life if you stumbled across it in a gallery window – everything from Mallo’s kitchen cabinets to the color palette of his nightly pills feels injected with the luminescence of an endangered sea creature. By the end, our hero is writing again. He doesn’t know if this new work is going to be a comedy or a drama. He only knows that it’s alive. 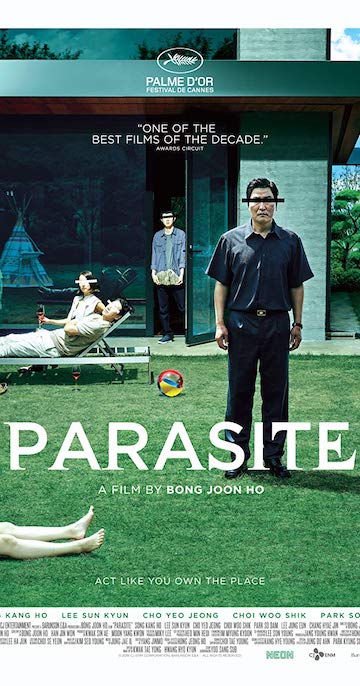 Usually, when something is deemed to be “too on the nose,” that’s a diss. A criticism of a pedantic piece of art that doesn’t trust its audience to get the point. But when I say that Bong Joon-ho’s dark comedy Parasite is on the nose, it’s a compliment. I’m not sure what the income inequality problem is like in Bong’s native Korea, but America was in desperate need of a whip-smart story about the ever-growing chasm between the rich and the poor, full of metaphors that hit us over the goddamn head. Parasite follows a poor family of four who lives in a basement apartment – huddled together watching drunks piss in an alley like it’s an FDR fireside chat. When they get a once-in-a-lifetime chance to infiltrate the gorgeously outfitted confines of a wealthy household, their hopes are sparked, and their fates are sealed. The instant-classic scene of the son and daughter (Choi Woo-shik and Park So-dam, witheringly sarcastic) practicing their fake art teacher backstory establishes the first half of the film as a class caper that hits that age-old snobs-vs-slobs pleasure center. But the family didn’t really have an exit strategy, and unfair class systems are constructed to destroy those who try to climb too high. So as Parasite transitions into the horror movie it was pretending not to be, and our smiles curdle into grimaces, we realize that we’re witnessing a brutally efficient takedown of the American dream. One that’s so on the nose, we have to breathe through our mouths. 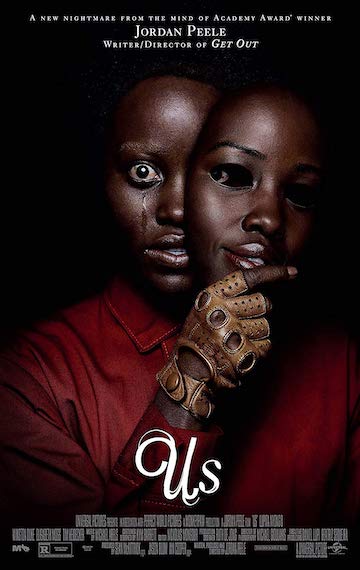 “It’s us.” Of all the indelible one-liners in the history of horror, this might be the most economical. Because when you take away all the clever flourishes and dynamic performances from Jordan Peele’s second feature, what’s left is a multi-layered metaphor anchored in a stark, preternatural fear – that, unlike what so many well-meaning parents and teachers have told us, we’re not special. Us pits the Wilson family, led by matriarch/superhero Adelaide (Lupita Nyang’o, Best Actress), against their own bloodthirsty doppelgangers, clad in red jumpsuits and wielding beautiful vintage scissors. As Adelaide discovers the origins of this mysterious legion of doubles, and does the math to connect them with a certain House of Mirrors-related childhood trauma, Peele’s ultimate points also emerge, fully formed. We might not be able to see the strings, but the haves and have-nots of our society are inexorably connected. When a smirking California doofus “earns” enough money to buy a hideous modern home with a boat out front, there is an equal and opposite impact on the guy who works at the factory that processes marine supplies. That doofus may think they live in different worlds. But no. It’s us.