Hey, Franz here. While horror movie-related lists are a dime a dozen in October, I can’t refrain from making one myself. I did get more specific than just listing the scariest flicks of all time, however (He’s Just Not That Into You would’ve been in the top five for sure). Here are ten horror movies that are just fun to watch – we’re not talking about directors digging into your psyche to mine your deepest fears, or trying to make you think at all for that matter. “A hell of a good time” is the only criterion.

10. Dead Silence (2007)
In movieland, grizzled cops have predictable vices – booze, acting like a loose cannon, and … that’s about it. But in Dead Silence, Donnie Wahlberg plays a grizzled cop whose obsession is grizzliness itself. The character, Detective Jim Lipton, is more prone to pulling out an electric razor than a gun. It’s an awesome running gag amidst a beautifully idiotic, post-Puppet Master plot line, a steady reminder that the filmmakers aren’t taking their vengeful-ventriloquist-from-beyond-the-grave story seriously.

9. Halloween V: The Revenge of Michael Myers (1989)
While the first two installments of the Halloween saga were genuine thrillers, with Michael Myers playing the relatively believable role of a psycho ward escapee on a killing spree, ensuing sequels got progressively more unrealistic, and more fun. Halloween V is my favorite, if only because Donald Pleasance, who plays Myers’ long-time psychiatrist Dr. Sam Loomis, is at his sweetest and frailest, trying with all his might to convince the authorities that Myers’ niece has a psychic connection, that she knows he didn’t die when he fell down that mine shaft at the end of Halloween IV. His earnestness garners some genuine sympathy in thoroughly stupid surroundings.

8. The Brood (1979)
A horror movie designed to freak out a generation of privileged, self-absorbed therapy addicts, this 1979 David Cronenberg weirdfest tells the story of a psychotherapist who invents a way for his patients to create physical manifestations of their negative feelings. Which, of course, leads to bloodthirsty troll children in adorable winter coats wreaking havoc at the whim of their “mother,” played by an understandably dazed Samantha Eggar. It might be overlong and hard to follow, but The Brood’s uber-twisted Grapes of Wrath-acid-trip ending will wake you up right quick. 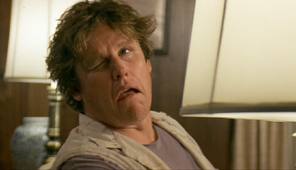 7. Silver Bullet (1985)
After a paraplegic Corey Haim murders a werewolf priest by shooting him in the face, the girl who played Anne of Green Gables turns to him and asks “Are you alright?” He responds, “All except for my legs. I don’t think I can walk.” Cue the laughter. Oh yeah, and Gary Busey is there.

6. Bones (2001)
The clichés at the center of Bones sound too daunting to overcome. Snoop Dogg plays a ’70s numbers runner called Jimmy Bones, whose spirit haunts his old nightclub in the form of a red-eyed dog. But as Jimmy’s beloved neighborhood crumbles under crack’s ironclad grip, Jimmy’s spirit gets pissed, and his movie gets wildly entertaining. This is Evil Dead-meets-Superfly, pairing gallons of fake blood, arguments with severed heads and out-of-leftfield parallel universes with real ghetto commentary and a feasible love story. Snoop clearly relishes the role, and is magnetic throughout. And while the surprise ending isn’t necessary, that doesn’t make it any less cool.

5. Santa Buddies: The Legend of Santa Paws (2009)
The Lord is my shepherd, I shall not want. He makes me lie down in green pastures; He leads me beside quiet waters. He restores my soul; He guides me in the paths of righteousness For His name’s sake. Even though I sat through Santa Buddies, a movie about a post-apocalyptic future in which packs of talking dogs fly around the world every Christmas, spewing Christian propaganda and perpetuating black and female stereotypes everywhere they go, I fear no evil, for You are with me; Your rod and Your staff, they comfort me.

4. The Gingerdead Man (2005)
Gary Busey’s second appearance on this list is for a horror-comedy masterpiece that takes the rules from Child’s Play and applies them to a six-inch high gingerbread man. After psycho killer Millard Findlemeyer gets the death penalty, his witch mom mixes his ashes into some gingerbread dough, which she drops off at a bakery where Sarah Leigh (hilarious!) works – the woman whose testimony sealed Millard’s fate. Of course, somebody bakes the dough into a cookie shape, the cookie kills the shit out of people even though all you’d have to do is stomp on him or spray him with a hose, and everything is left open for a hopefully endless string of sequels. Plus, there’s the ultra-convenient 70-minute running time – you can watch this puppy on your lunch break. 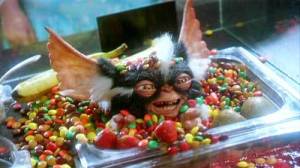 3. Gremlins 2: The New Batch (1990)
As dark and imaginative as Gremlins was – it remains the ultimate cautionary tale about the evil that lurks inside all very cute things – the sequel is much more fun. Director Joe Dante returns for The New Batch, and does all the crazy stuff he probably wanted to do in the first, Chris Columbus-penned film, ending up with an anarchic, horror-comedy gem. When Gizmo shows up in a state-of-the-art NYC office building (where his old owners Billy and Kate both happen to work), he gets wet and spawns a brand new litter of havoc-wreaking bi-ped lizards. As the Gremlins infiltrate research labs and TV studios, become super-intelligent and transform into bat- and spider-like creatures, they create a chaos that’s both hilarious and cathartic – if only today’s massive corporations could be taken over with such ease and panache. 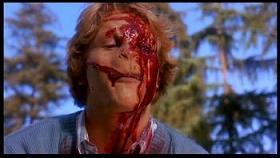 2. Sleepwalkers (1992)
Of the reams of junk that Stephen King has slapped his name on, the screenplay for Sleepwalkers is his campiest, most gloriously tossed-off accomplishment. A small town is terrorized by a mother and son who are telekinetic, vampiric shapeshifter werewolves that must feed on the life force of virgin women to survive. Director Mick Garris delivers it all with the requisite wink and a nudge, creating two of the most unforgettable horror/comedy moments of all time – a graveyard fight with a corkscrew-in-the-eye coup de grace, and a climactic slow dance between the main character Tanya and the half-dead monster Charles. Not to mention a catchphrase that should’ve took the world by storm – “Stop looking at me, you fucking cat!” 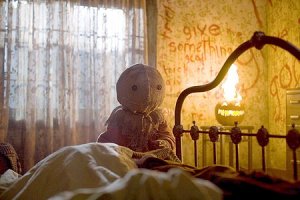 1. Trick ‘r Treat (2007)
This straight-to-DVD effort is the easily the best Halloween movie of the 21st century, and stands up there with anything John Carpenter has churned out over the years. An anthology of horror story vignettes that weave together in wonderfully clever fashion on one eventful Halloween night, Trick ‘r Treat gives us spooky urban legends, vengeful ghosts, werewolves, a sadistic principal, and Sam, a tiny trick or treater in a creepy, burlap bag Jack-o-Lantern costume. Writer/director Michael Dougherty lets us see the events unfold in provocative, Tarantino-esque ways, without overcomplicating things – amidst the swirl of converging plot lines, Dougherty anchors everything on the crippling guilt of one old man. So while Trick ‘r Treat is loads of fun to watch, it’s also an important reminder for horrorphiles – nothing is scarier than a story told well.