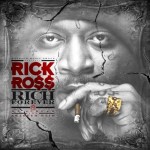 With details about Mitt Romney’s Swiss bank accounts clogging the news cycle, it seems like a bad time for Rick Ross to drop a mixtape that tells us how great it is to have a fuckton of dough. But while practically every track on Rich Forever is concerned with materialistic one-upsmanship (in bed, Ross must count Benzes and Bugattis instead of sheep), it’s redundant in all the right ways, developing Ross’s drug kingpin character into something delightfully cartoonish. And while the tape is loaded with guests – most notably an in-top-form Nas on the standout “Triple Beam Dreams” – Ross is never outshone, painting ridiculous Robin Leach panoramas with irresistible panache. His steady baritone is the only thing about Rich Forever that follows a less-is-more aesthetic, providing a perfect counterpoint to all the tremendous, towering beats.

If only I knew this existed when I was 13. Sure, the 29-minute onslaught of Slayer’s major label debut is a thrilling kick to the gut when I hear it now, the merciless fretwork and impossibly fast double kick fills exploding from my car speakers like a 5 Hour Energy/kerosene cocktail. But I’m relatively well-adjusted these days, and couldn’t possibly love Reign In Blood with the intensity that my introverted teen self felt toward another 1986 thrash masterpiece, Master of Puppets. And while those records have a lot in common – from their obsession with death right down to some similar-sounding riffs – Slayer’s was wilder, more dangerous. After one listen to “Angel of Death,” you’ll be reaching for the replay button, despite the taste of blood in your mouth.

It’s one thing to hear a consciously poppy group get all experimental. Like, say, Vampire Weekend on Contra. It’s another thing to listen to Merrill Garbus. While the tUnE-YarDs visionary’s groovy prog-pop suites cover territory similar to VW’s hyperactive Paul Simon impersonations, they’re getting there from the opposite direction – w h o k i l l sounds like it was pulled from the brink of avant garde limbo, so it could briefly frolic in pop music heaven. Garbus likes to gesticulate wildly with her voice, imitating sirens and woodwind sections, screaming and chattering and falsetto harmonizing amongst spare synths and dissonant guitars. This could be an acquired taste for some; w h o k i l l can be as confounding as the artist’s letter casing. But when Garbus anchors everything with one of her killer nerd-funk rhythms – including some of the greatest bass lines this side of Soul Coughing – we’re talking instant gratification.