For some reason, I viewed a significant amount of the 2010 Emmys on Sunday evening. Few of the winners deserved their hardware, of course, but host Jimmy Fallon was the least deserving of the spotlight. His Gen-X Billy Crystal schtick – changing the lyrics of pop songs to make them about the nominees – was only slightly less appalling than a half-assed Silence of the Lambs showtune. And his attempts at off-the-rails zaniness might have succeeded if he wasn’t so cripplingly uncomfortable on camera. Introducing presenter Tom Selleck as “my dad” and running over to hug him, saying “I knew you were real”? Funny on paper. But when Fallon delivered it with his trademark “Look, I’m jokin’ around” mannerisms, it bombed. But enough of that. Here’s an Emmy-nominated show that’s good, and an Emmy-nominated movie that’s bad.

Poke holes in this popular Showtime series if you want – its heroic serial killer concept certainly gives you lots of room to do so – but four years in, it’s more absorbing than anything on the tube, and most offerings at the multiplex. After an underwhelming third season, which was anchored on the ho-hum relationship between Dexter Morgan (Michael C. Hall) and his unlikely apprentice, hotshot D.A. Miguel Prado (the redwood of wooden actors, Jimmy Smits), season four gets back to what made the show irresistible in the first place – Dexter, himself a sociopath, hunting a supremely creepy, heretofore untraceable serial killer, intrigued by what they have in common and determined to destroy him nonetheless. The psycho in question is the Trinity Killer, a man who has killed in cycles of three, in the same meticulous fashion, for decades. And what might sound like James Patterson tripe on paper is brought to life with hair-raising efficiency by John Lithgow, whose Emmy-winning guest turn is a masterfully controlled depiction of insanity. The actor rarely uses more than the posture of his massive frame and his wildly expressive eyes to let you know he’s more monster than middle-aged man – when he does fly off the handle, it’s almost a relief. Lithgow’s performance is also good enough to smooth over the clichéd moments, including some hackneyed jokes about baby-induced sleep deprivation (Dexter and his wife Rita got married and had a kid to close out season three, if you care). After seeing the heart-stopping, bloody finale and thinking back on the season, Trinity’s helpless, horrifying face overshadowed all. 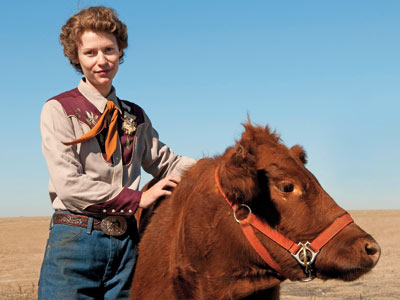 This HBO original movie was one of the biggest winners on Sunday, proof that American viewers remain suckers for feel-good, “me against the world” true stories, even if they fail at making you feel more than just good. What’s especially frustrating about Temple Grandin is what it could’ve been. All the raw materials of a memorable, out-of-the-box bio-pic are here – the title character is thoroughly enthralling, a resilient, brilliant, autistic woman who revolutionized the slaughterhouse industry with her cattle-sensitive designs. This is prime territory for a bold visual approach, to show audiences what life was like through Grandin’s eyes, resulting in the kind of dramatic tension you don’t see every day. Instead, director Mick Jackson’s movie is such a formulaic heartstring yanker, it makes you wonder if HBO bought the script from Lifetime. A lot of lip service is given to the fact that autism is misunderstood, whether it’s a motivational speech from her mentor/high school science teacher (David Strathairn) or a weepy flashback from her mother (Julia Ormond). And as Grandin, Claire Danes puts her all into the vocal impersonation and various emotional breakdowns (the stuff that wins Emmys, which she ended up doing), but never quite goes beyond cartoonish mimicry. By the end, you understand that Grandin is a remarkable person indeed. You don’t understand much else about autism, but man, do you feel warm and fuzzy.