In 1993, at the height of grunge’s marketability, Radiohead released “Creep,” a single that nailed the genre’s central oxymoron – self-loathing art that draws a crowd. Suddenly, these guys were getting what seemed like their 15 seconds. Except they didn’t relish their dalliance with stardom. It made them feel alienated and exhausted, to the point where they started to seriously ponder the fleeting nature of life itself. And then they made an album about that. “You can crush it, but it’s always here,” warns Thom Yorke on the opening track of The Bends, as if the reassuring swirl of Wurlitzer and guitar was the only thing keeping the reaper off his back. Guitarist Jonny Greenwood utilizes way more than his volume knob this time around, creating atmospheres of aching wonder and wanton destruction. From the consumer culture nightmares of “Fake Plastic Trees” to the raw existentialist dread of “Street Spirit,” Radiohead confront one unfixable, harrowing reality after another, while writing choruses that blot out the world. Instead of eating hot dogs like most of us do when we feel like nothing matters, they made an attempt at shared catharsis. Self-loathing had made way for selflessness. 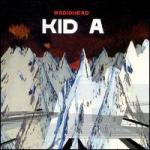 Radiohead – Kid A (2000)
Kid A begins with a run of warm, inviting notes from a Fender Rhodes, only to immediately eschew all feelings of coziness by piling on layers of robotic voices, which beckon and whisper underneath lyrics about sucking on lemons. The song, “Everything In Its Right Place,” makes it clear right off the bat that Radiohead’s follow-up to OK Computer was going to be something entirely different, a fearless furrow into a cold, binary world, where obtuse electronic squeals and eerily mumbled vocals take the place of tightly constructed choruses and guitar solos. OK might be the band’s best collection of tunes, but Kid A is its bravest, and ultimately most rewarding. Whether it’s the hyperactive brass section that closes out “The National Anthem,” the spazzed-out drum machine bliss of “Idioteque” or the gorgeous, shooting star guitars of “How To Disappear Completely,” every track contains some kind of inventive twist, which join forces to create a lonely, beautiful universe – when Thom Yorke sings “I’m not here/This isn’t happening,” over an expanse of synthesizers, one gets the sensation of being an astronaut staring at the void. From the deceptive welcome of its beginning to its fragile, awe-inspiring end, Kid A doesn’t just entertain lovers of adventurous rock music, it makes us feel like we’re part of something bigger.

Radiohead – Amnesiac (2001)
After the stroke of disaffected, interplanetary genius that was Kid A, it was easy to discredit its follow-up, which was released only eight months later and reeked of leftovers. Eight years later, it’s easier to look at Amnesiac outside of its predecessor’s significant shadow, and some brilliant, elegiac electro-art-rock is what comes to light. Sure, the alternate version of “Morning Bell” shouldn’t be there. But if songs like “You and Whose Army?” and “Life In a Glass House” are throwaways, then I’ll be the first to say “Mmmmm … garbage.” 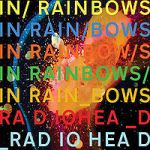 Radiohead – In Rainbows (2007)
Radiohead has always been a band with a big sound, whether it was the anthemic alternative rock of The Bends, the alienated art rock of OK Computer or the increasingly atmospheric experiments of subsequent albums. Which makes the relative leanness of In Rainbows its most immediately distinctive quality. From the fluttering electronica of “15 Step” to the soft, circular piano chords of “Videotape,” this was the most direct, boiled down effort from the band in at least a decade. And it’s also the most emotional. Thom Yorke has always been brilliant at delivering his bleak worldview in a spooky, disaffected way, making it all look easy with that alien birdsong of a voice. But here, he compares himself to “an animal/Locked in your hot car,” a desperate, sexy metaphor for unrequited love. This sharpened focus and visceral writing does wonders for the songs, which are some of the band’s best. “Nude” is the most stunning of the bunch, with Yorke’s multi-tracked vocals ebbing and flowing into each other, eventually spiralling into the heavens like an untainted soul.

The King of Limbs is a short piece of work by Radiohead standards, which was seen as a disappointment by some. I see it as a sign of the band’s maturity. This is a magnificently dense recording, a world of lurching synths and frantic polyrhythms that unfold like a strange, binary orchid – but only after multiple listens. If it went on for an hour, it would wear down the most devout listener, much like the second half of Hail to the Thief. Plus, the band rewards us by ending the record with a pair of immediately accessible tunes – the gorgeously eerie piano ballad “Give Up the Ghost” and the lite electronica boogie of “Separator.” The only problem I have with TKOL is that it doesn’t feel like a momentous occasion, the band having painted cold, beautiful landscapes like this before. It’s an ingeniously layered production of eight well-written songs, something that could only disappoint a Radiohead fan.